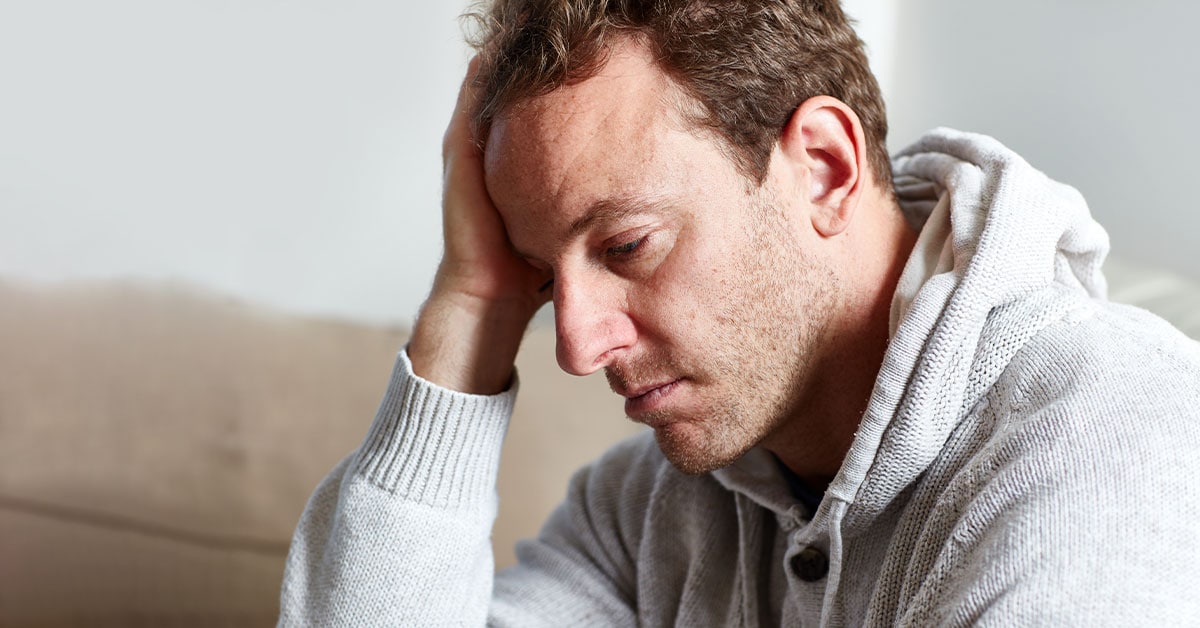 In recent years, there has been a significant movement to destigmatize mental health issues. People are encouraged to open up to each other, share their struggles, reach out to get professional help, and be less judgemental towards those who are struggling. While this movement was never meant to target one gender over another, in practice, women have seen a lot more success with tackling mental health stigma than men.

Despite encouragement to be more open, many men still feel pressured to bottle up their emotions and are often left to deal with their issues alone. Read on to find out why this is and what can be done to help the issue.

Stereotypically, women are known to feel more emotional than men and are therefore seen as more likely to suffer from issues with depression, anxiety, and mood. At first glance, mental health statistics may seem to support this.

In 2021, American women reported higher overall rates of mental illness than men, with 25.8% of females reporting some form of mental illness compared to 15.8% of males. Depression, one of the most common mental illnesses, is said to affect 9% of women and only 5% of men, making women around 40%-50% more likely to suffer from it.

However, these statistics don’t tell the entire story. Prevalence of bipolar disorder is relatively equal among men and women (2.9% and 2.8%), while rates of schizophrenia are two to three times higher in men than women. Men are also more likely to develop substance abuse problems and antisocial disorders than women.

Finally, in contrast to women’s higher rates of depression, men are three to five times more likely than women to die from suicide in the United States.

These findings suggest that, while mental illness may look different in men and women, men are actually more likely to suffer from some of the most serious mental health problems. So why aren’t men getting the help they need?

Why Mental Health Issues in Men Are Less Recognized

While men may suffer from certain mental health issues more than women, they are, on the whole, less likely to seek out help — which may contribute to figures that suggest they have less mental health issues than women. When men don’t speak about their problems or get diagnosed, their issues go underreported and ignored.

But why does this happen? While the reasons why any individual man may avoid seeking out help can differ, the following are some of the most common factors. Often, these factors intertwine with each other.

The Pressure of Masculinity

One of the biggest reasons men don’t talk about their mental health is because they feel pressure to live up to societal standards of masculinity. Men are often taught that they have to be strong, stoic, and in control at all times.

The Stigma Around Mental Health

Unfortunately, despite modern efforts to fight against it, mental health stigma is still alive and well in our society. People who suffer from mental health issues are often seen as weak, crazy, or dangerous. This can cause anyone to hesitate about opening up, but men in particular may feel like they’ll be abandoned or judged if they admit their struggling, since they are stereotypically supposed to be able to handle their emotions.

Another reason men may not want to talk about their mental health is simply because they don’t know how to. Studies have shown that men, on the whole, have less social support than women.

While women often have networks of friends they can talk to about their problems, men are taught to bottle things up and are far less likely to share that they’re struggling with their friends. This creates an overall environment where men feel more emotionally isolated, which may cause them to feel like they have to tackle their problems alone.

Lack of Resources and Support in Mental Health Spaces

In addition to societal factors, men often have practical reasons why they don’t seek out help. Since men rarely talk about their mental health, resources and support for men’s mental health issues are often lacking. This can make men feel like there’s nowhere to turn when they’re struggling.

For example, many therapy and support groups focus on emotions and feelings — which can make men feel uncomfortable and unwelcome, since they are not used to talking about their emotions. Men may not feel like they belong in mental health spaces and like their problems are not being adequately addressed.

How Men Can Get Help

Despite the challenges men face when it comes to mental health, there are still ways for men to get the help they need. Here are some suggestions:

If you’re a man looking for help, it’s crucial to find a therapist who understands the unique challenges men face. Look for a therapist who has experience working with men and is familiar with the issues men commonly struggle with.

If going to a professional sounds too daunting or otherwise doesn’t seem like the right option for you, men’s mental health support groups can help men share their experiences with others who understand what they’re going through. This can be a great way to feel supported and connected and learn new coping strategies. If in-person support groups don’t appeal to you, you can always try a virtual version in an online forum or social media group.

For many men, talking through problems and using traditional treatments just doesn’t feel natural. If this is the case for you, there are many other treatments men can try. For example, ketamine therapy has been shown to be effective in treating many of the most common mental health issues in men, including substance abuse, PTSD, OCD, depression, and anxiety.

Ketamine has been effective in decreasing symptoms of depression in up to 70% of patients, and has shown great promise in treating other symptoms as well. If you’re interested in seeing if ketamine is right for you, you can visit RestoratIV Wellness & Infusion Center’s website to learn more.